After more than ten years away from music, pop singer-songwriter Mandy Moore comes to Majestic Theatre Dallas on Thursday 23rd April 2020 for an evening of song, celebrating the release of her upcoming studio album – her first since 2009's Amanda Leigh! Of course, Moore has been busy building her career as an actress, winning two Screen Actors Guild Awards for her role in This Is Us, and was honored with a star on the Hollywood Walk of Fame in 2019! However, music is and always will be her first love, and fans will be thrilled to see her back on stage where she belongs! 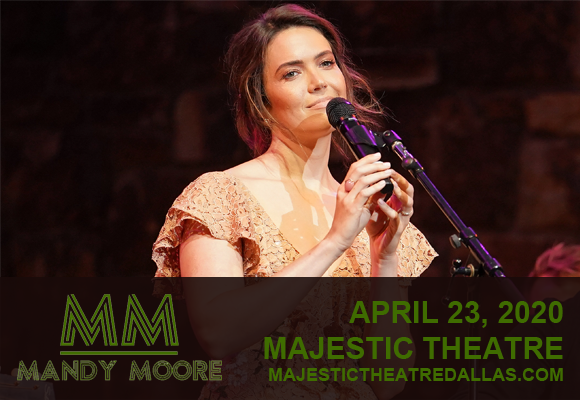 Alongside Christina Aguilera, Jessica Simpson and Britney Spears, Mandy Moore was one of the most popular and visible teen pop sensations of the 1990s. Moore found instant success with "Candy", her 1999 debut single, and her debut album So Real was a platinum-certified hit. Over the next ten years, Moore released I Wanna Be With You (2000), Mandy Moore (2001), Coverage (2003), Wild Hope (2007), and Amanda Leigh (2009) – slowly changing musical direction from bubblegum pop to folky singer-songwriter. In addition to her musical success, Moore nurtured her acting career, starring in the films Chasing Liberty (2004), Racing Stripes (2005), Because I Said So (2007), License to Wed (2007), Love, Wedding, Marriage (2011), 47 Meters Down (2017), The Darkest Minds (2018), and Midway (2019). She also voiced Rapunzel in the Disney movie Tangled, and its subsequent spin-offs, and in 2016, she took on the role of Rebecca Pearson in the NBC family comedy-drama series This Is Us. Moore has been nominated for the Golden Globe Award for Best Supporting Actress and the Primetime Emmy Award for Outstanding Lead Actress in a Drama Series, and won two Screen Actors Guild Awards for Outstanding Performance by an Ensemble in a Drama Series for her performance in the role.