Supporting an exciting 3-disc collection of his incredible solo material, former Fleetwood Mac guitarist Lindsey Buckingham comes to Majestic Theatre Dallas on Tuesday 6th November 2018! Solo Anthology – The Best of Lindsey Buckingham delivers fans all of their favorite material from Buckingham's astounding career, and that's exactly what he will bring to the stage in this incredible show! Don't miss your chance to see a timeless musical icon live! 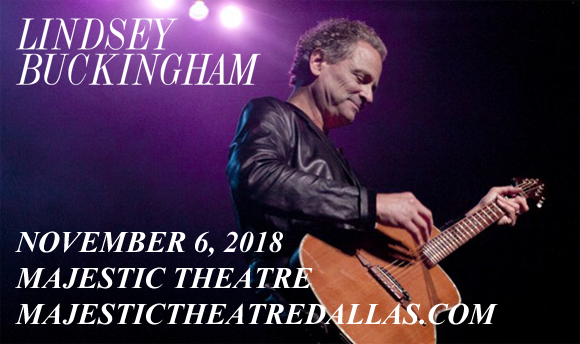 American musician, singer, songwriter and producer Lindsey Buckingham shot to fame in the mid-1970s as lead guitarist and one of the lead singers of Fleetwood Mac. In the late 1960s and early 1970s, Buckingham was the guitarist in psychedelic folk-rock band The Fritz Rabyne Memorial Band, alongside singer Stevie Nicks. The pair began a relationship upon leaving the band in 1972, and began working together as the musical duo Buckingham Nicks, releasing their self-titled debut album in 1973. The following year, Buckingham was offered the chance to play guitar with Fleetwood Mac after the band's previous guitarist, Bob Welch, left the band. He agreed, on the proviso that Nicks also joined the band. Fleetwood Mac released their self-titled album in 1975, reaching number one on the Billboard 200, but it was 1977's Rumours (which featured several songs about the break-up of Buckingham and Nicks' relationship) that introduced the group to worldwide fame. After several successful, but tumultuous, years with the band, Buckingham left in 1987 to focus on his solo career. As a solo artist, Buckingham has released six studio albums and three live albums. In the 1990s, Buckingham rejoined Fleetwood Mac after a one-off reunion at the 1993 inauguration ball for President Bill Clinton. In 2017 he released a collaborative album with fellow Fleetwood Mac bandmate Christine McVie, titled Lindsey Buckingham/Christine McVie. In 2018, Buckingham parted ways with Fleetwood Mac once again, and he embarks on a solo tour this year.