It's time to get excited! Majestic Theatre Dallas presents Elder Millenial and comedian extraordinaire Iliza Shlesinger on Friday 25th January 2019! Pulling out all the stops, Iliza Shlesinger knows how to make a crowd go wild, with a phenomenal, unforgettable and hysterically funny live show! Now THAT'S entertainment! Tickets are on sale now, get yours today to ensure you get the best seat. 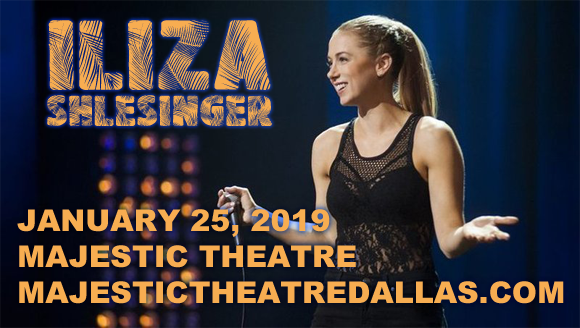 American comedian Iliza Shlesinger began her career in comedy in 2007 when she moved to Los Angeles after graduating from Boston's Emerson College, having performed there with one of the campus' comedy sketch groups, Jimmy's Traveling All Stars. In LA, Shlesinger joined the Whiteboy Comedy troupe, and her popularity within the group led to her performing at The Improv in Hollywood. That year, she won  Myspace's So You Think You're Funny contest and was then featured as the G4 network's Myspace Girl of the Week. This led to television work, including E! Network's Forbes Celebrity 100, TV Guide's America's Next Top Producer, Comedy Central Presents, John Oliver's New York Stand Up Show, Byron Allen's Comics Unleashed, and History Channel's History of a Joke. The following year, Shlesinger became the first woman, and the youngest contestant, to win NBC's Last Comic Standing, in the series' sixth season. To date, Shlesinger has released four Netflix specials: War Paint (2013), Freezing Hot (2015), Confirmed Kills (2016) and Elder Millenial (2018). She currently hosts a late-night talk show called Truth & Iliza on Freeform.